Group A
​East side, Going South from Origin

#8. Yes, it starts with 8. Boyes Blvd. and Highway 12. Photo from the 1930s at right of Kramer’s Inn and, farther down, the Ice House the Liaros building. Kramer’s and the building next to it, currently the Barking Dog Coffee house, still exist. The Liaros building stood until 1993. On the left we see the Plaza Center building, built in the 1950s on the site of Boyes Plaza and the railroad depot. It still stands (2018) and now houses the Post Office.

#5
COLLAGE 5 and Revisions
Arroyo Road at right.
Photographs circa 1930s, 2008, 2016
Far left-The (New 2018) Barking Dog-Once Larson’s Liquors and/or Denny’s COG Club.
From the Index Tribune of Feb 25, 1949-“Mr. and Mrs. Oscar Larson are continuing daily with the remodeling of their liquor and sporting goods store in Boyes Hot Springs and will continue to expand its facilities in the future…”
Next to Larson's, originally Kramers Store and Greyhound station, became Mike and Rose’s Grocery in the 50’s.
It was tattoo shop until 2009, then the travel agent Mas Por Menos. Lonesome Cowboy shop, circa 2016 to date. The façade has been renovated. (More use of two generations of my own photo’s).
The Revision shows the façade painting on La Tienda Ineguz by Rico Martin.
Next to Kramer's, now Golden West Glass,  was Gallo Bros. Chrysler dealer and Chevron Station (1949-1978).
At the north side of Arroyo, Tienda Inequez ahora mismo (2018). Was a furniture store and the Becker real estate agency according to photo (Zan-1950’s)
At the south corner of Arroyo, the original location of the first Mary’s Pizza Shack, founded by Mary Fazio in 1957, now a sizable northern California chain.

#5 revision. Revised to show Gallo's car lot at the site of the glass company and the Mary's Pizza sign. 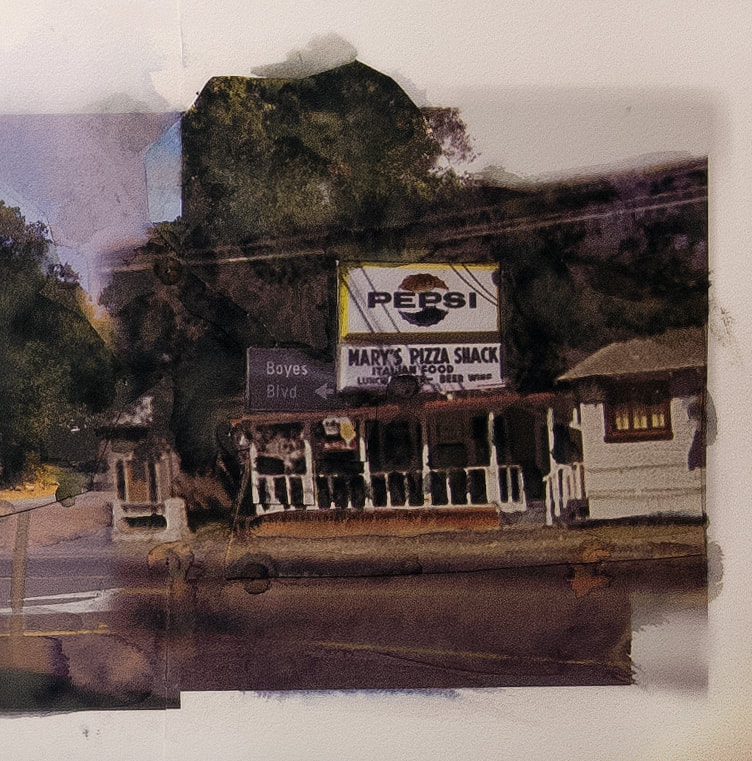 #5 revision 2. Showing the Rico Martin embellishments. In 2015, designer Rico Martin was hired to re-do the facades of several businesses on the highway. I think this one, at Tienda Iniguez, is the most successful. Read more at http://www.sonomanews.com/news/4247333-181/springs-murals-draw-flak-spur 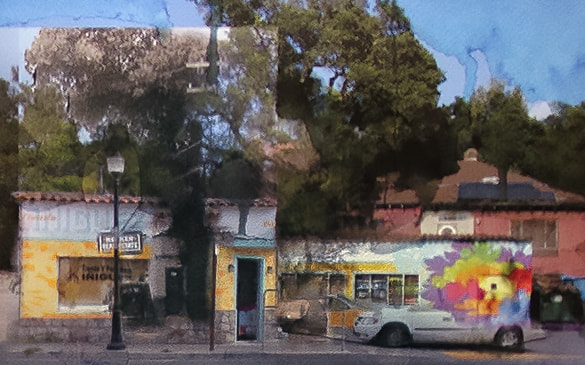 #7. Calle Del Monte, center left.
​Photographs:circa 1949, 2008
Boyes Springs Food Center, according to the IT, opened in 1949.  The building was built that year. Mr. and Mrs Saccato were the first proprietors. In July of 1949 they sold to Horace Smario and Frank Del Rosso.
In my opinion, the iconic nature of the neon sign and the building itself make them historic resources that should be restored and maintained. As of 2018, new owners have pledged to do just that.
The now empty lot next to Food Center: The Boyes Springs Resort, according to Zan postcard of Food Center, 1950’s. See springsmuseum.org/2016/10/31/the-boyes-springs-food-center/ for more.

#14. Photographs: 2008, 2015 Two Houses. The trees (Western Larches) are foreground and very large. They dominate and dictate the composition. These houses were deemed important by, and illustrated in, the Redevelopment design guidelines. (page 17, Highway 12 Design Guidelines, Sonoma County Redevelopment Agency, 1994). The construction barricades at left are from the sidewalk project of 2015. 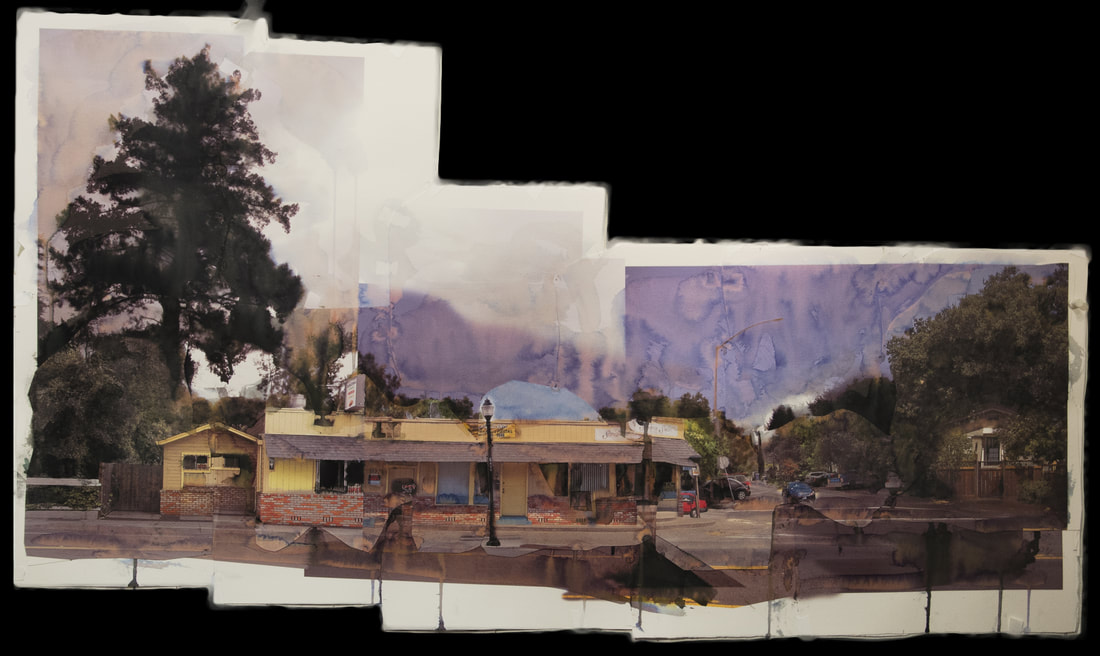 #14B. Hawthorne Street at left. At the right are images of sidewalk construction. A small seasonal creek goes under the highway here and major work was done on the culvert. 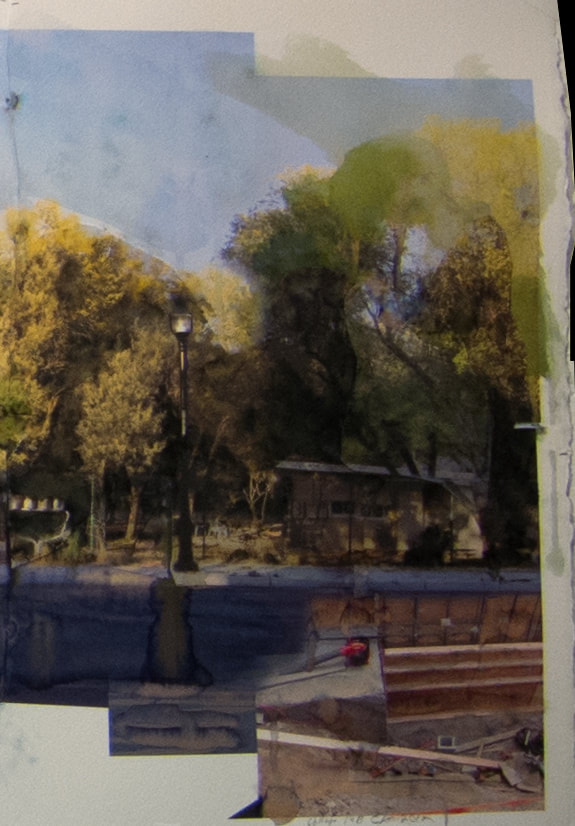 #14C part 1. This one especially should be revised to show the concrete retaining wall they built as part of the sidewalk project. 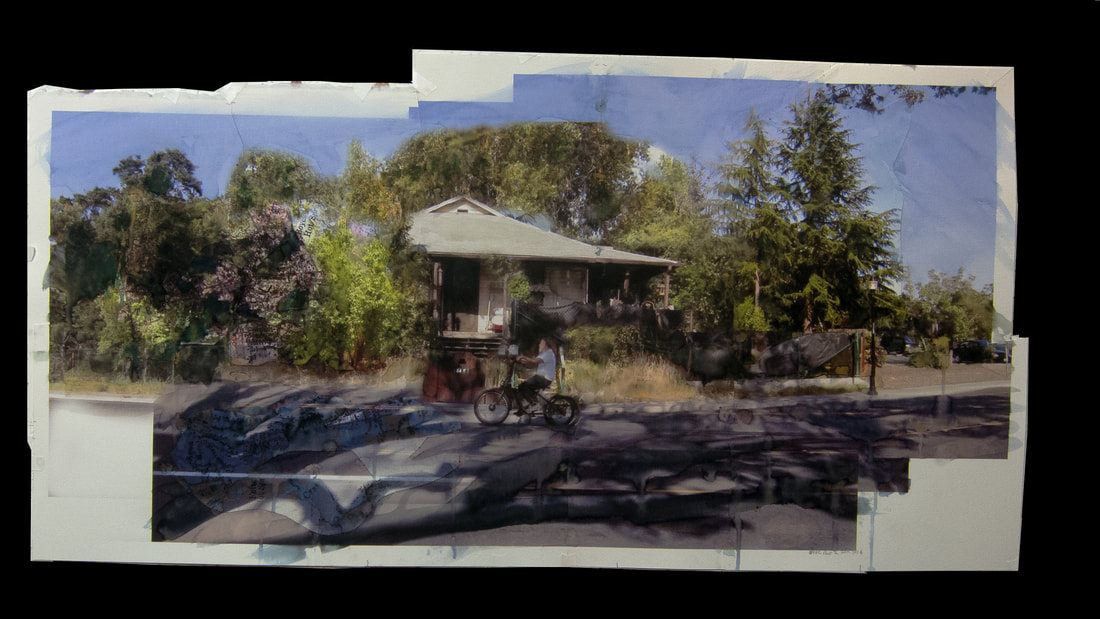 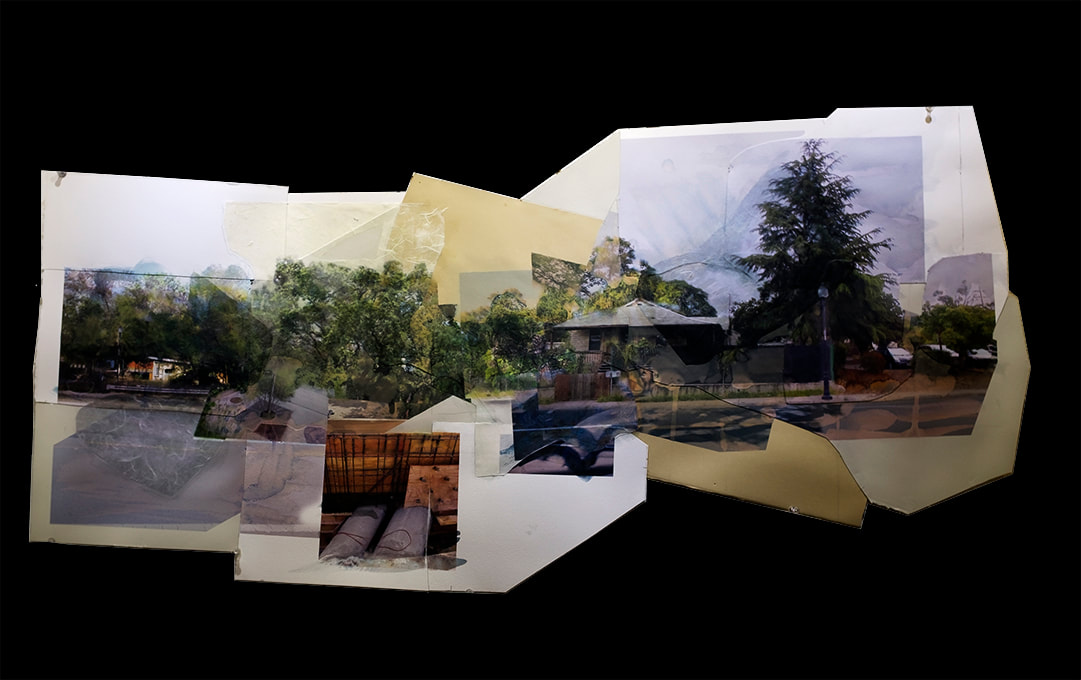 #14D revision. Designer Rico Martin descended on the Springs in 2015 with a project to transform the facades of a number of businesses on the highway. This proved to be controversial. See http://www.pressdemocrat.com/news/4243287-181/splashes-of-color-in-sonoma 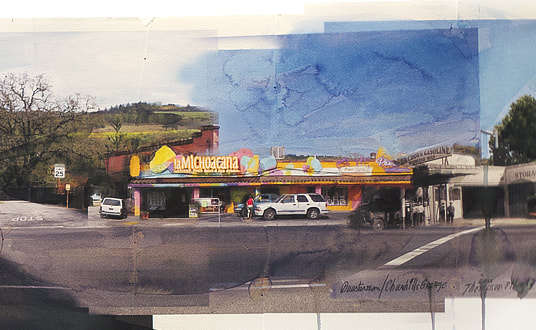 #14D revision detail. At far right is a 1920s photograph of the Red Crown service station that was on this site.

#14F. Siesta Way at left. Sonoma Valley Grange, as it was then known, at right. The Grange bought the building from Selig Rosenthal in 1934. The Grange transitioned to the Sonoma Springs Community Hall in 2016. To the let of the Grange is the old location of La Salette restaurant. The building is a remnant of Rosenthal’s Resort. For more info see springsmuseum.org/2014/09/04/new-to-the-springs-historic-photo-database-2/ and springsmuseum.org/2016/12/25/rosenthals-resort-cantors-resort-and-acacia-grove-part-one/ 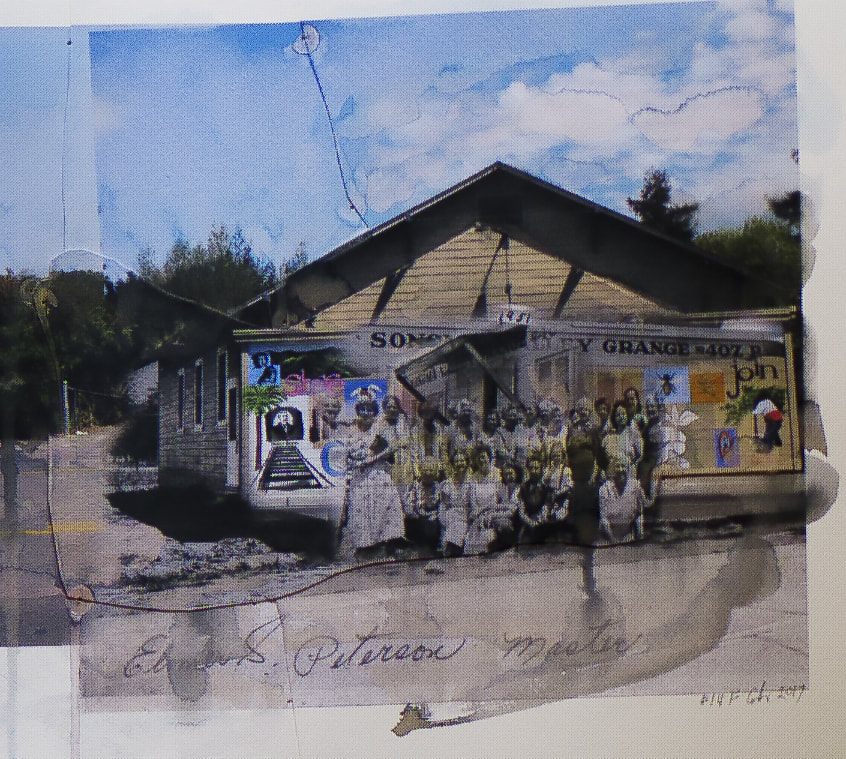 #14G. The mobile home park is the site of Rosenthal's Resort (circa 1920-1940), which catered to the Jewish community of San Francisco. The figures on bikes at center are from Google Street View. 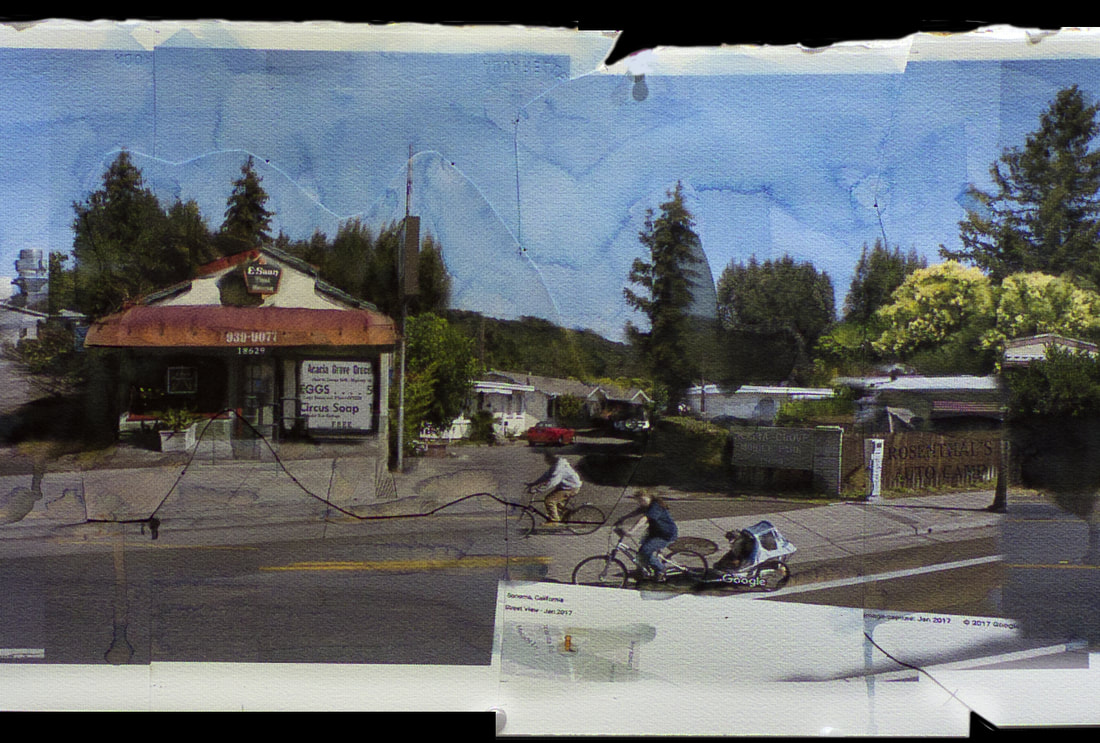 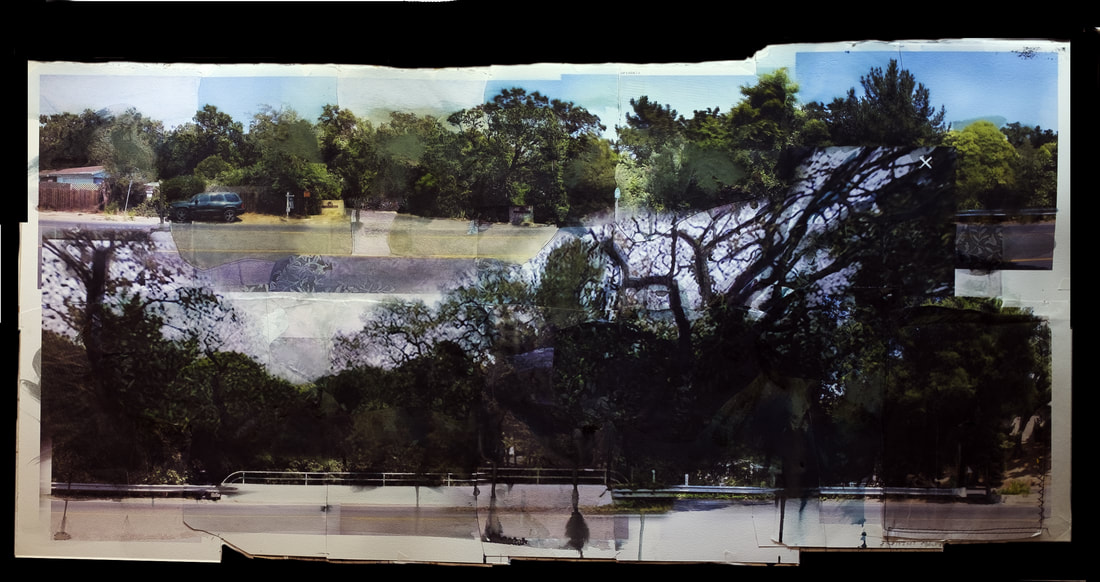 #14 I+J. The bridge over Agua Caliente Creek, which is the original southern boundary of Rancho Agua Caliente, and later, T.M. Leavenworth's claim, center left. Leavenworth sold part of his land to Henry Boyes. It seemed right to combine these two panoramas, one on top of the other. The bottom one appears to be trying to swallow the top one. Things happen. I used images from Google Street View, as well as my own photos. 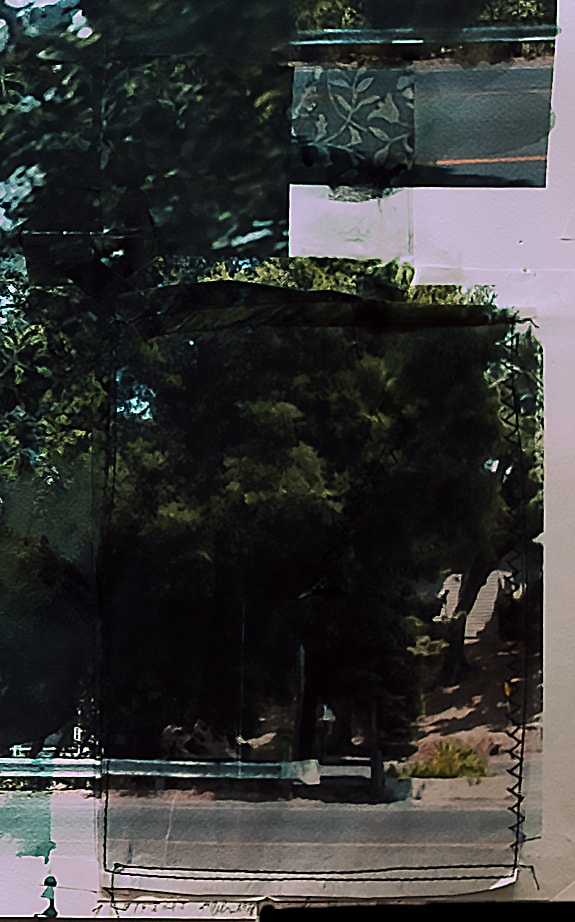 #14 K. At Donald Street. This is the first collage which is entirely sewn.

#14L. Harley Street at right center. Use of mulberry paper and acrylic as well as watercolor. 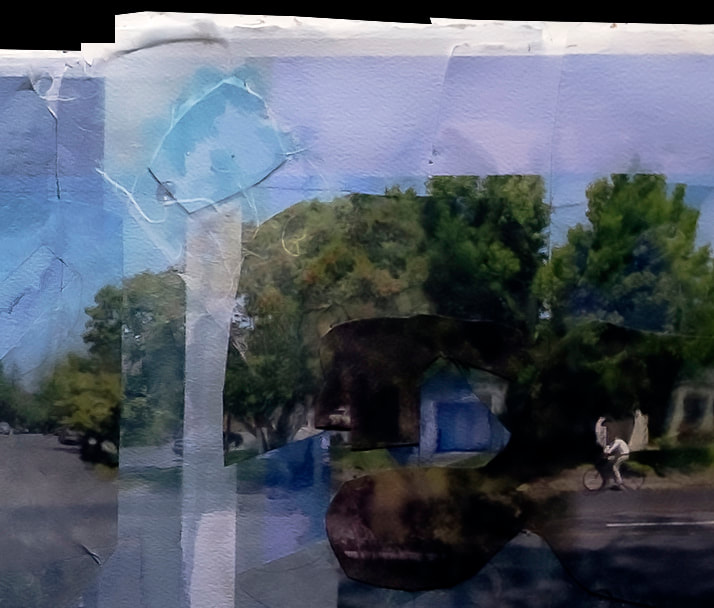