#1
Photos:1920’s, 1950’s, 2008
The Plaza Center Building. Built in the 1950’s. Southeast corner added, also in the 50’s.The post office, established July 8, 1911 in another location, was relocated in 1936 to the Woodleaf Store, then the Plaza Center. The Plaza Center housed at various times, Polidori’s Variety Store, Betty’s Cut ’n Curl”,  a branch of the county library, and Pine Wagner’s Valley Drug.
An Index Tribune 1961 article about local resistance to unifying Sonoma and BHS post offices mentions Bud Castner, Enrico Gallo and Mary Fazio as opposed.
An inside source tells me that to this day the Sonoma Mission Inn will not list its address as “Boyes Hot Springs,” preferring the supposedly more classy “Sonoma.”
The Woodleaf Store (across Boyes Blvd from the Post Office).
Earliest ad for Woodleaf in the  Index Tribune is 1922. In 1960 the name was changed to The Big Three. The building still exists, but is threatened with demolition (2018.)

#1 revision. Acquisition of tourist snapshots from 1928 occasioned the revision.The palm tree image, courtesy Bruce Griewe, is from 1942, when the site was the Boyes Springs Plaza and train depot. 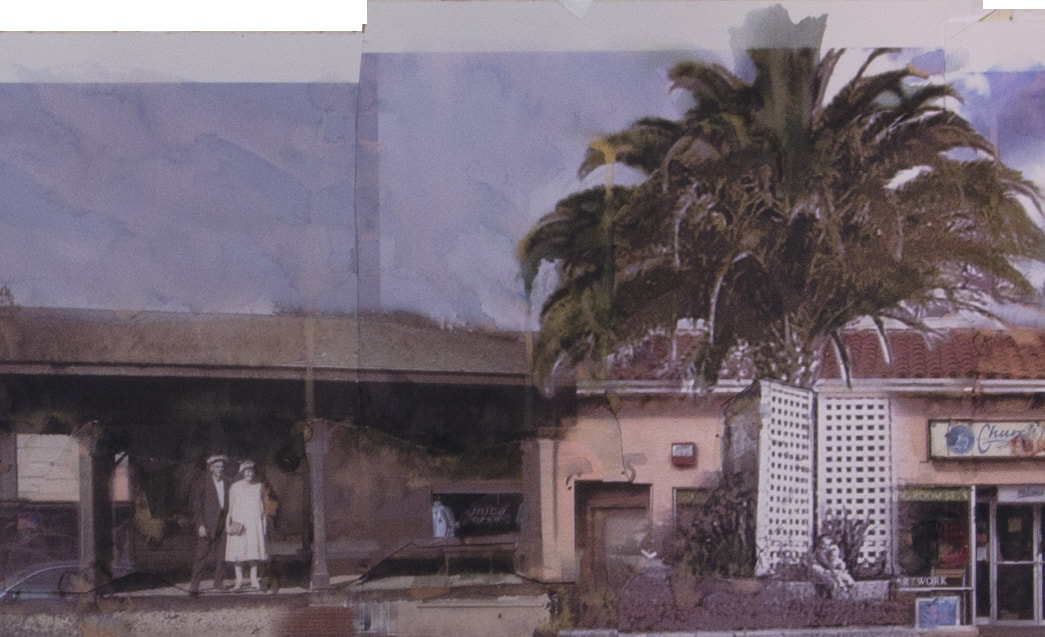 #2
Photos circa 1940, 2008
La Hacienda Taqueria/Sam’s Grill and Hotel (“phone 35M”) It sits on lot 23 of the “Boyes Springs Hotel Grounds”. It was purchased from E. Anagitos by Sam Ganos 5/24/1922. Anagitos got it from Boyes Hot Springs Hotel in 1916. The assessor’s map (“tank maps”) shows lot 23 as “grill”. This is before the fire of 1923.
In the IT of Feb 3, 1939 “Sam Ganos Improves Place to Keep Pace With City” Sam Ganos, one of the original Boyes Hot Springs boosters and who saved his grill from the big fire of 1923 by pouring the famous Springs water on the roof when it was all but doomed, has steadily improved is place and now is installing a fine front and back bar…(more)” My emphasis. Very few buildings survived that fire. That makes 17960 a historical resource, in my opinion. For more on Ganos and the Caders see springsmuseum.org/2016/11/26/mendel-cader/ 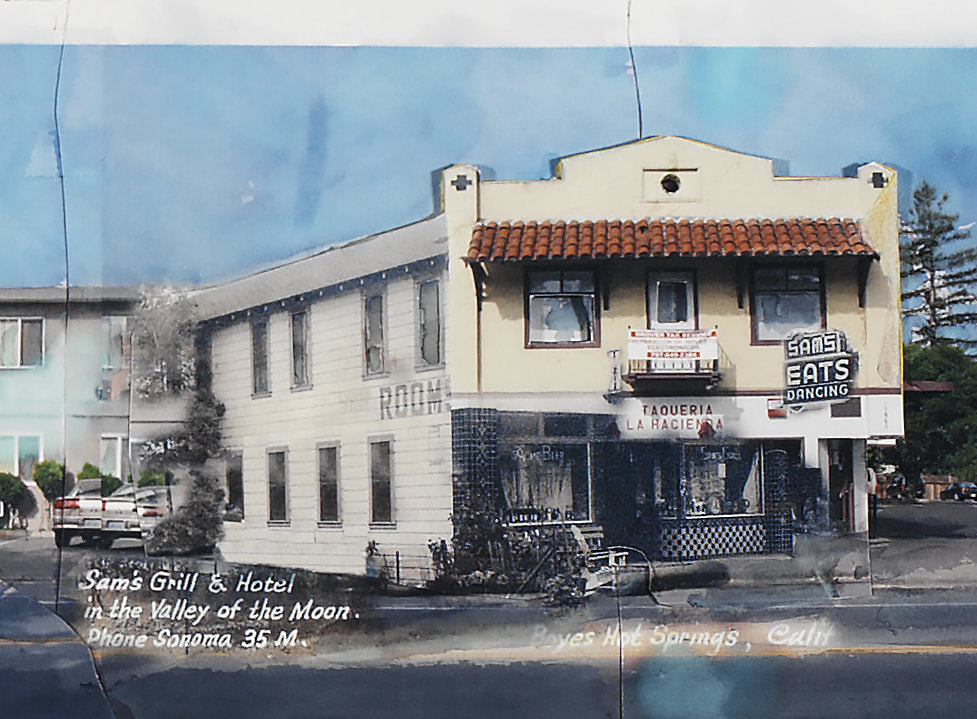 #2 detail. Due to massive alterations to the building since 2008, this collage is due for a revision. 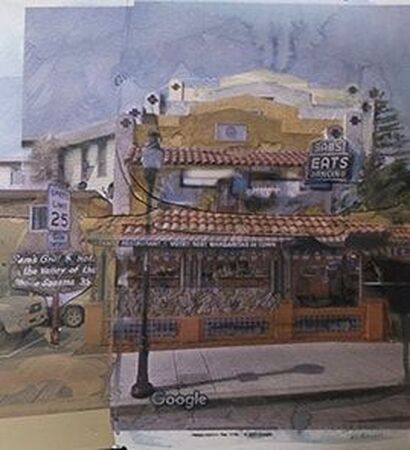 #13. Sorry about that! Absolutely no planning was put into the numbering system.
Photographs:1959, 2008
Parson’s Hardware and Lumber opened as such in 1950. Photographs courtesy of Don Parsons. See springsmuseum.org/2015/10/08/important-places-parsons-hardware/ for more about Parson's.

#34
#34. Lichtenberg Avenue at right. Rudy Lichtenberg was an owner of the Boyes Bath House and real estate developer in the early to mid twentieth century. 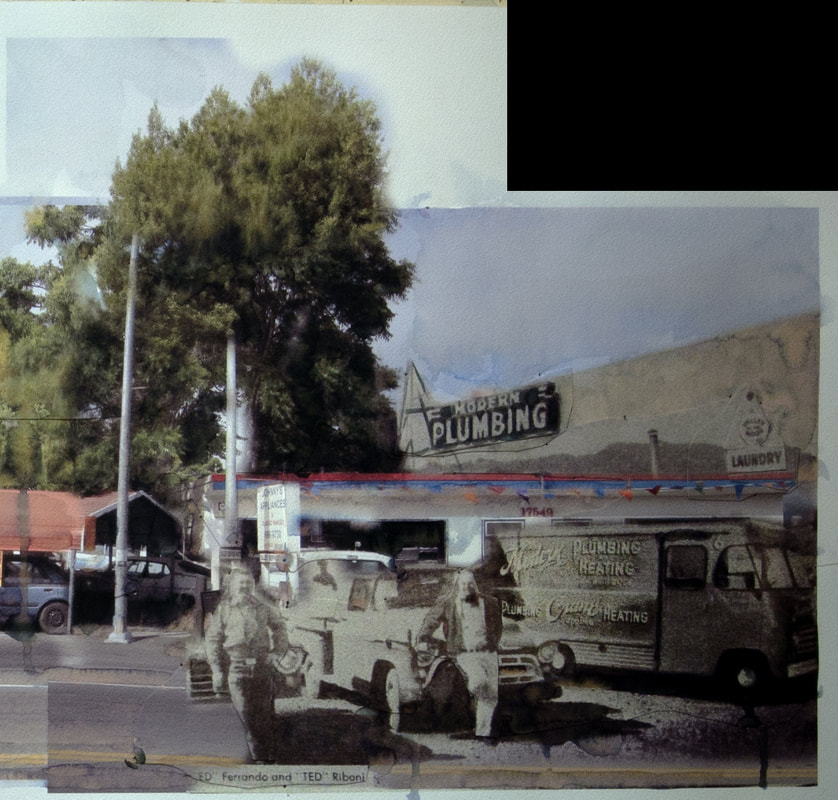 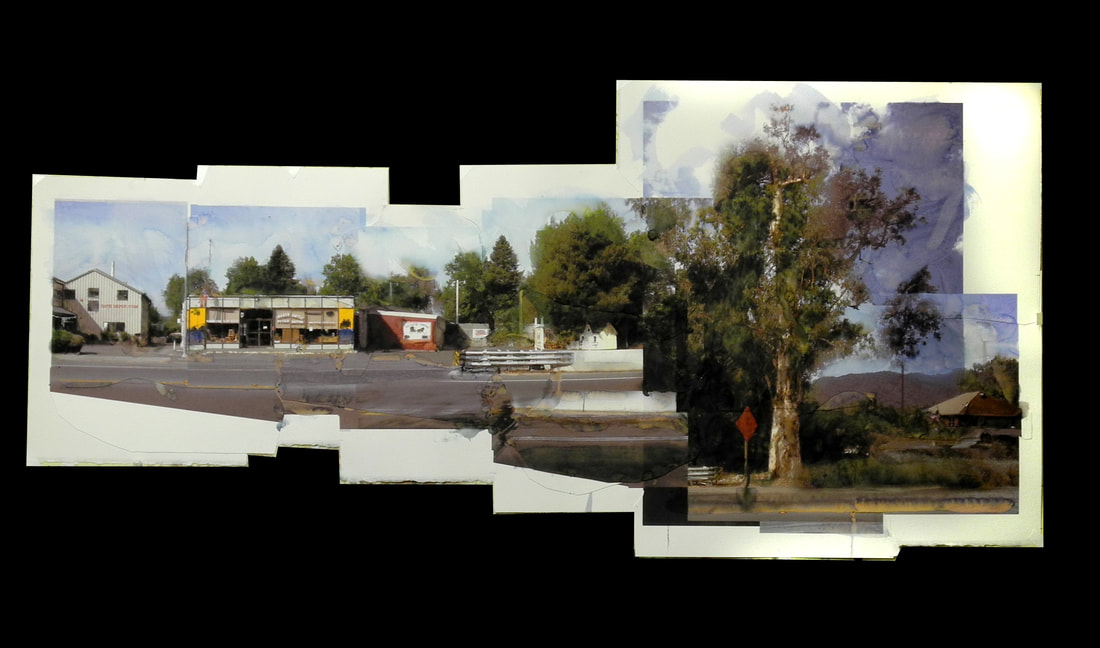 #37
At left, the commercial building that is Republic of Thrift today (2018.) This building was yet another location for Modern Plumbing at one time. At right, on the bank of Piqueño Creek, a huge old eucalyptus which was removed, alas, for sidewalk construction. See springsmuseum.org for more photos: https://springsmuseum.org/2016/05/​ 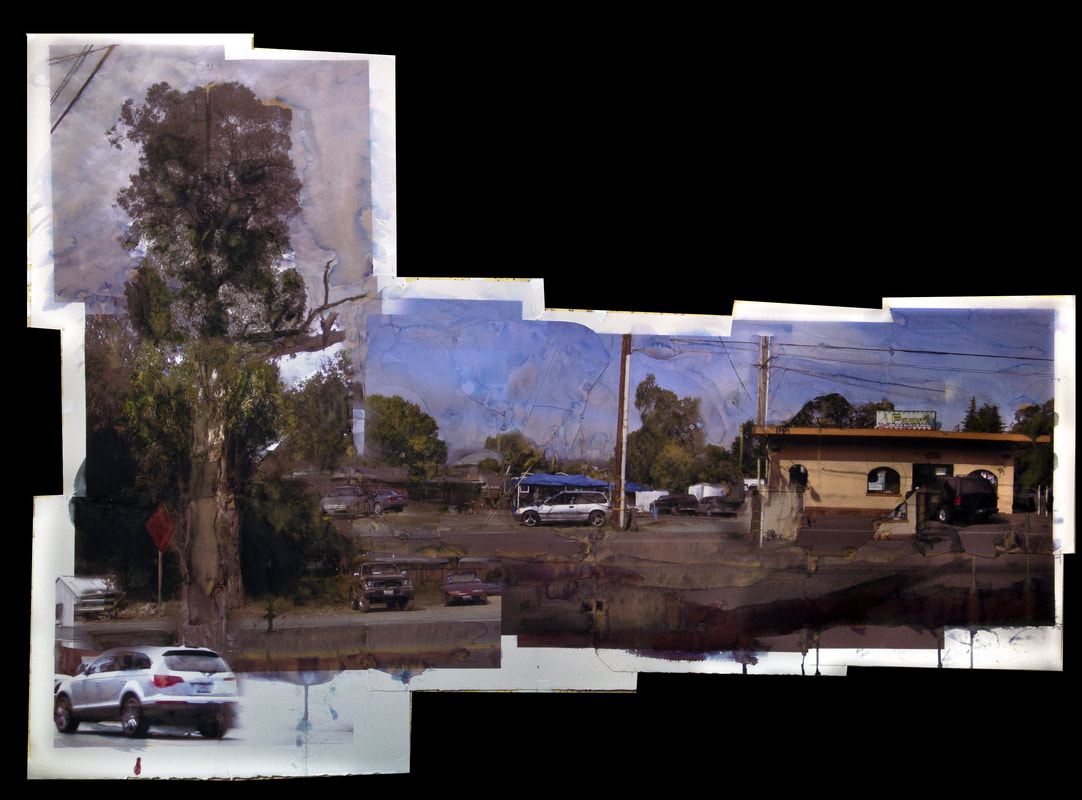 #38. Another view of the missing eucalyptus.

#39. According to the Historic Resource Report issued for Redevelopment, the blue commercial building at far right was built in 1915.

#40. The original La Morenita Market, superimposed over the new La Morenita. La Morenita is an affectionate term for a young, dark haired, and/or dark skinned woman. It is sometimes used to refer to La Virgen de Guadalupe.

#41
Intersection of Depot Road. Photographs from 2011, 2008, 1960s, 1930s.The market was called Mike’s in 1997 when I moved to the valley. The photo of it as Tripp’s is from a Sonoma Valley High school yearbook of 1967. The market is located at the corner of Depot Road, which leads to the Fetters Hot Springs station of the North West Pacific Railroad. That building is still there as of 2018. A silent film, a comedy, was made in the area in 1922. One shot features a train pulling into that station: springsmuseum.org/2016/07/29/fetters-depot/
In the background, upper left, Sonoma Mountain, which looms over so many photos of the area over the years.

#42
Photographs 1910s, 1920s, 1960s, 2008.
Depot Road at left.  Debarking train travelers could walk a few hundred feet to the north to reach the Fetters Springs Hotel and Resort, one of the largest and most important Sonoma Valley destinations. The hotel burned down in 1975. 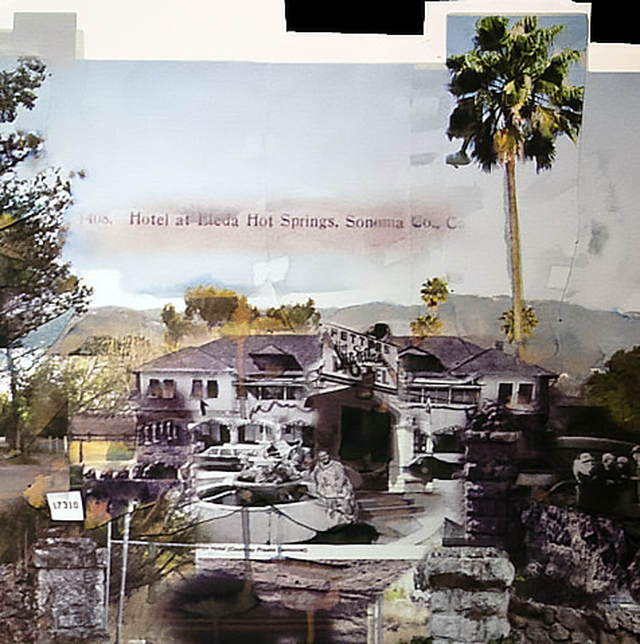 #42 detail, showing an image of Juanita Musson, the last proprietor of Fetters Springs.

#45. Vailetti Drive at left. The original Flowery School was at this corner. The school was founded in the 1880s. 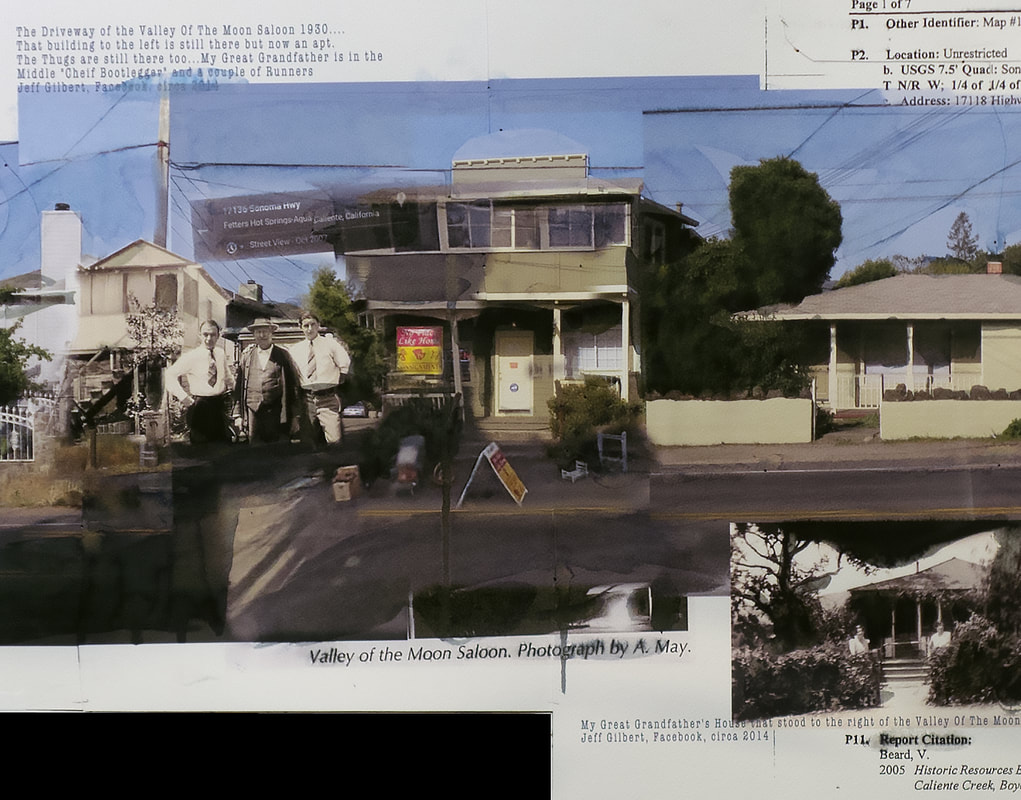