Group B
​East Side Going North

#4A. Vallejo Street at center.
COLLAGE 4A and Revisions
Photographs: circa 1912, 1930s, 1993, 2008
The building next to the Melody Club was on part of the lot that is now (2018) employee parking for the Sonoma Mission Inn has a billboard on the side featuring the “Got Milk?” campaign. That started in October of 1993. The building was not there in December of 1996 when I moved to Boyes, so the photo I used dates from that period. The photo is from the Index Tribune. The caption says the building was known then as Kelly’s Deli and was going to be torn down as an “improvement” to the Springs. That building can be seen in a Zan  post card used in collage #12A which is probably from the 1940’s. Seen in the revisions, next to that building is Mr. Minges’ Woodleaf park entry arch from around 1912 (location per deed). Minges was the unofficial mayor of Boyes Springs and a prominent business man through the 1930s. His sign advertises “Desirable Summer Cottages.”
The Melody Club was operated in the Lanning building by Pete Mancuso until the 1970s.
Sam Agnew was a retired major league baseball player who opened his gas station on the corner of Vallejo and the Highway in 1935. Agnew had played with Babe Ruth and other greats. See this Springs Museum post for more info: https://springsmuseum.org/2017/06/25/the-fairmont-employee-parking-lot/
springsmuseum.org/2017/08/26/music-at-the-resorts/ 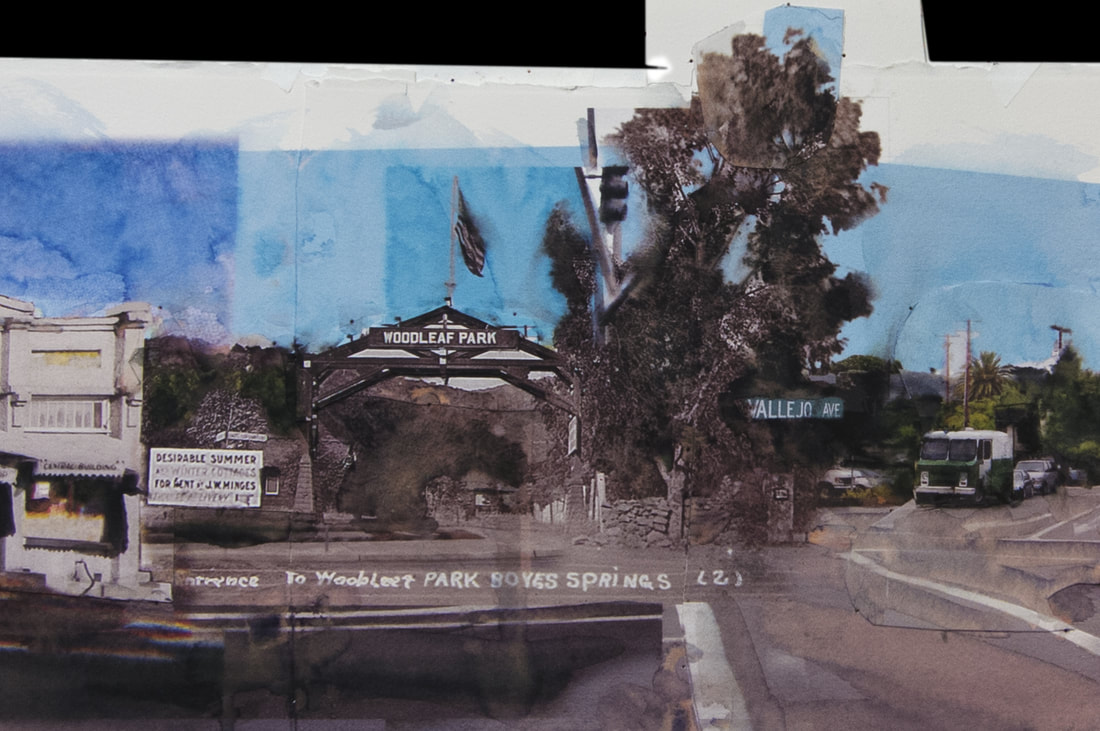 #12. Central Avenue at center.
COLLAGE 12A and revisions
Photographs circa 1935, 2008, 2015
The building with the white metal sign and arched doorway that was once part of Lanning Structures and before that Pete Mancuso’s Melody Club. Before that it was Bob and Edith Lanning’s Resort Club. The sign was removed recently. On Mar 25 1949 The IT said “Bob and Edith Lanning are getting things in readiness for the grand reopening of their popular Resort Club.”
Ad in the IT of Sept 18, 1969 “The Newest Spot in Town” Little Peter’s Melody Club…18020 Sonoma Hwy
The Fire Station was built in the 1930’s, partly with NRA funds. It now (2018) houses John Wayson’s Voltaire Electric.
The little shed roofed building to the left of the firestation was a Laundromat, houses El Molino Central restaurant as of 2018. See springsmuseum.org/2017/11/01/fire/ for more about the fire station and fire in general. 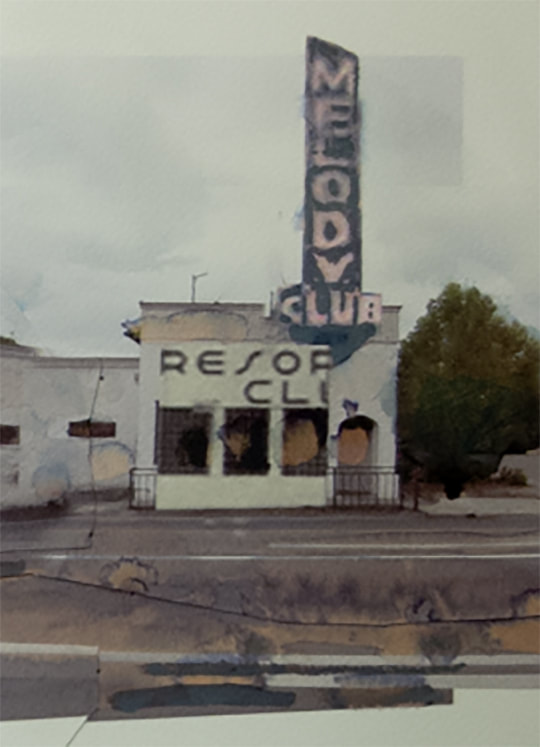 12A Revision 2. The Lanning buildings were torn down in 2020. New construction has begun, circa August. El Molino Central advertises carhop service, on their awning, due to the pandemic.

#15. Monterey Avenue at center.
COLLAGE 15 and revision
Photographs: circa 1930s, 2008
“Johnny’s Barber shop”. John Mazza cut hair at his shop in the Woodleaf Park Apartments building for sixty years. He retired in 2015. The shop is carrying on with new barber Antonio Juan. In the 1930s the shop space was home to Delaney Plumbing. Across Monterey Ave. is an old commercial building and a house. According to the IT of Mar 25, 1949-“A new upholstery shop, furniture and rug cleaning establishment will soon open in BHS under the proprietorship of Mr. Marty Hagen…the enterprise will be located in an attractive stucco home on the highway across from the Valley Lumber yard.” 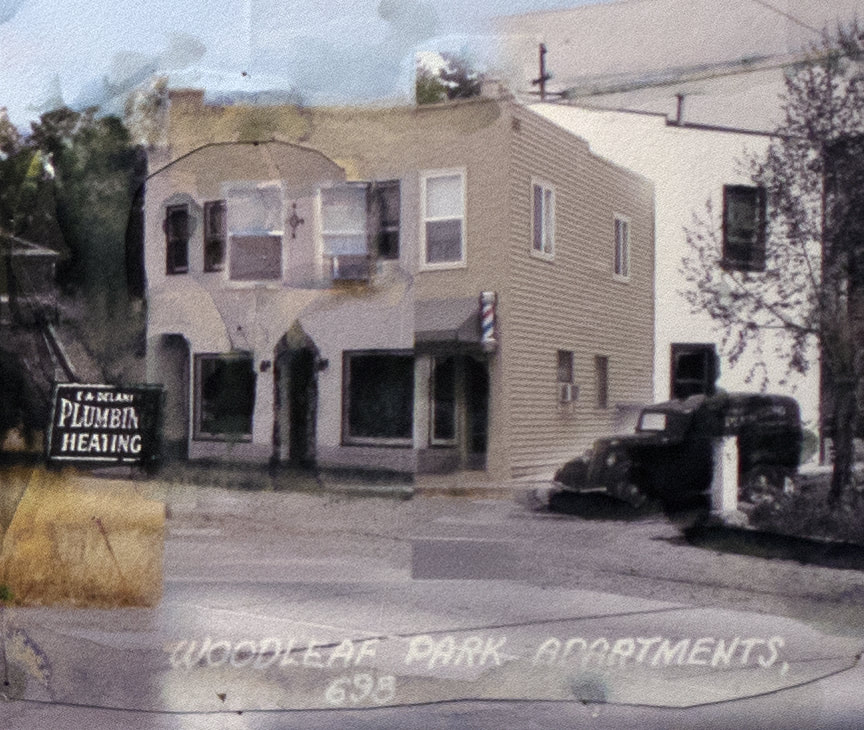 #16. Waterman Street at center.
Photographs: 2008
According to the IT of Sept 1, 1939 “Miss K. Waterman of Marin, owns the Sonoma Highlands tract, was here Monday looking over her property.” The Waterman family was prominent in the valley from 1900 to the 1930s. They were friends of the Londons.
Some time in the early 20th century, Western Larch trees were planted along the highway as ornamentals.

​
Photographs: 2008
A new commercial building under construction. In this case, the “historic” photo’s were taken by me, i.e. the empty lot, and the in-progress pictures. 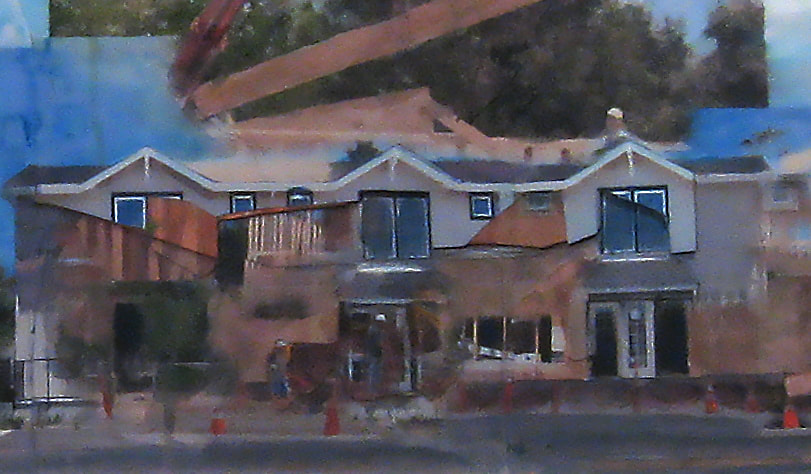 #18. Bernhard Street at left.
Photographs: 2008
IT of  September 1, 1939 “Mr. and Mrs. H. Bernhard returned to their home in San Francisco Monday. The Bernhards purchased a summer home in the Springs section several weeks ago and have been spending their vacation here.”
The red volcanic rock used for the stone pillar is typical of older walls in this valley but not used recently. 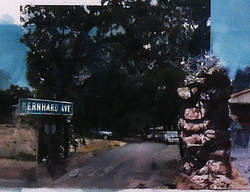 #18 detail.
I
It’s unfortunate that the lovely rough stone pillar had to be removed for the sidewalk work. Such is progress. 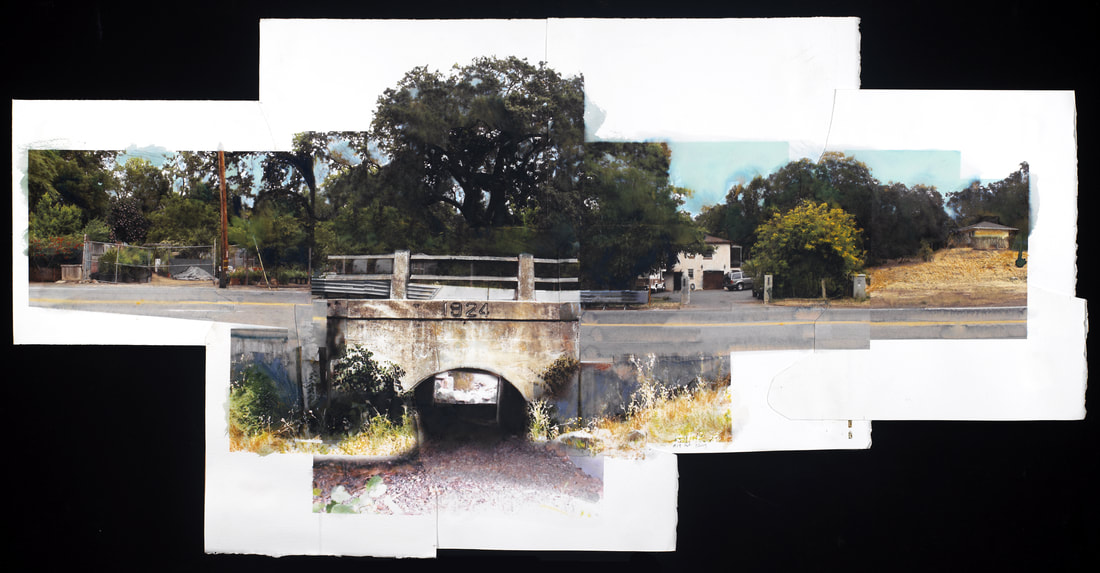 #19
Photographs: 2008, 2006
“Pequeno Creek.” According to a letter from Christi Vreeland to the Redevelopment Agency in 1994 (published in the design guidelines), Pequeño Creek is important as an animal corridor between the hills to the east and Sonoma Creek. She urged it be included in the Redevelopment design. According to her report, it originates above the Peqeño Valle Ranch at the top of Park Avenue. This photo of the old bridge, dated 1924, the year after the great fire, is an instance of my photographs becoming the “old” ones, as this bridge was replaced in the 2000s. 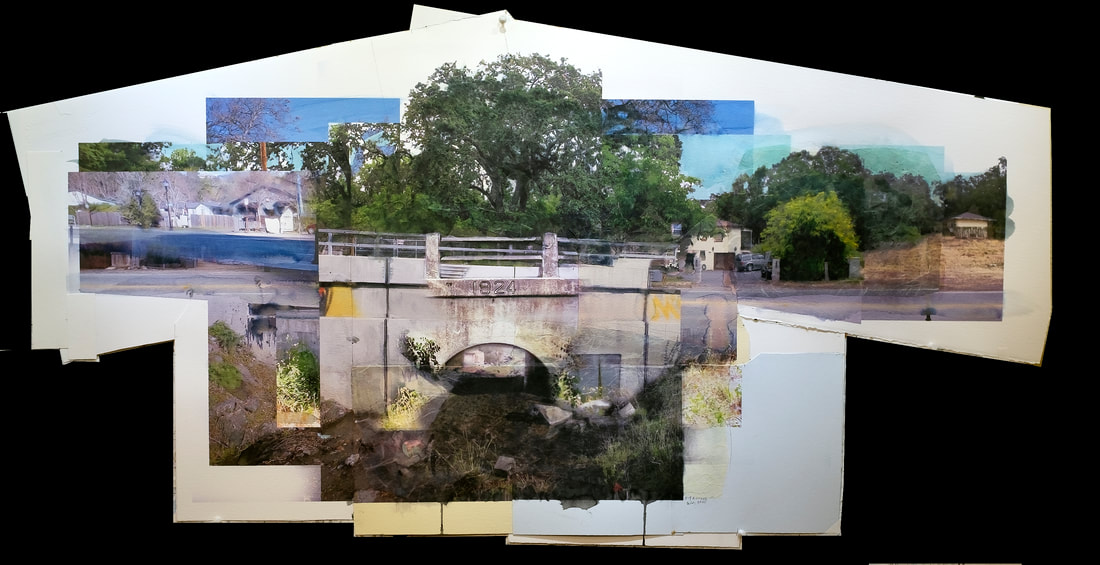 #20. Fetters Avenue at center.
Photographs: 2008, 2009
George and Emma Fetters were early property owners and hoteliers. The earliest ad in IT for Fetters’ resort is dated Feb 3, 1912-“most famous white sulphur bathing resort in California”. It was located farther north and on west side of the highway

#20.5
“20.5” because I shifted the view of #20 to include more of the buildings at the corner of Fetters Avenue that were once the Ideal Resort, when photos became available. I also superimposed text from the historic resource report issued for Redevelopemnt, which included the Ideal Resort buildings. 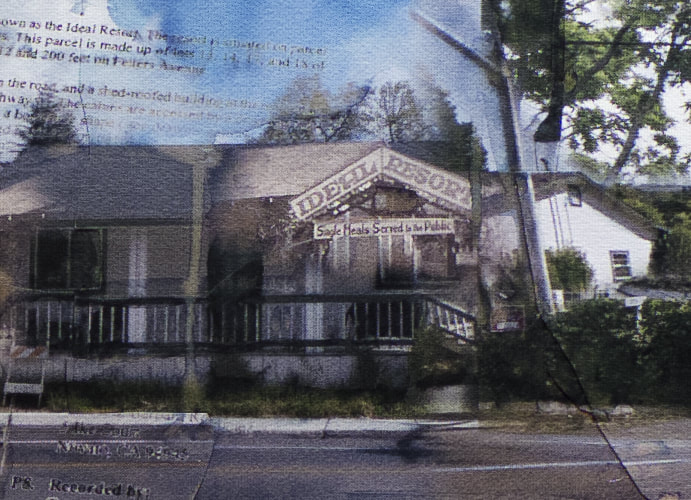 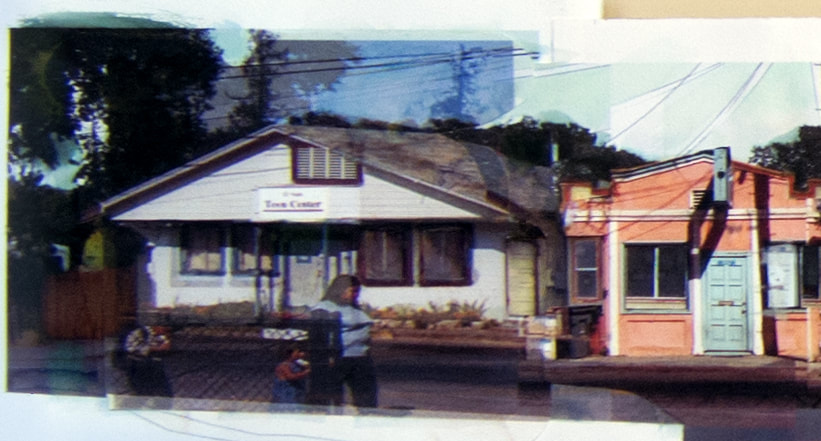 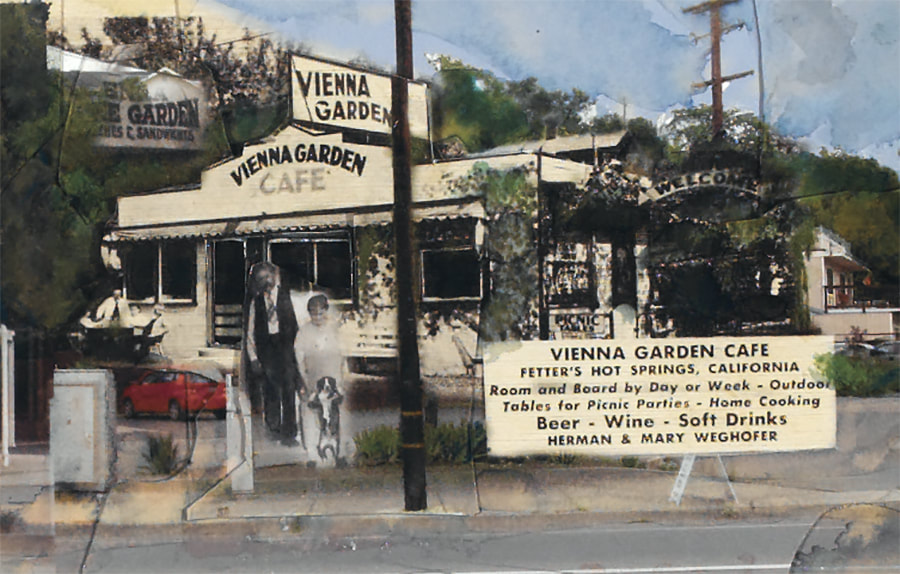 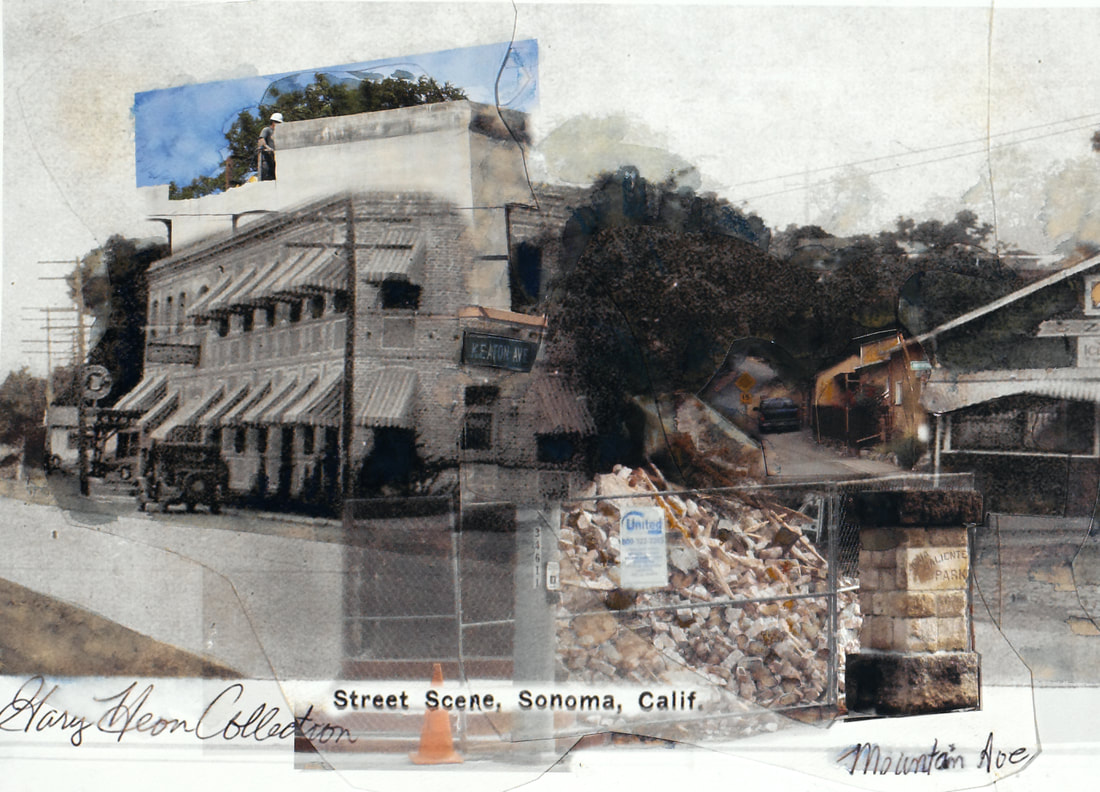 #23
Photo: 2008
This is a “mundane” collage. Nothing historic or even old, but still worth noticing. 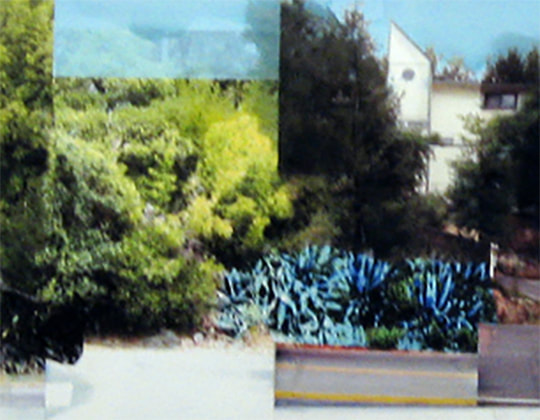 #24
Photographs circa 1940 and 2008. These buildings in Agua Caliente were the first ones to catch my attention in the late 1990s.  The one with the curved top on the façade has a medallion that read “A.D. 1930.” Various restaurants and stores have been in these places over the years, most notably Leixner’s Resort. They are now residences and in such bad repair that I’m afraid they will not be with us for long. If only there was an angel… 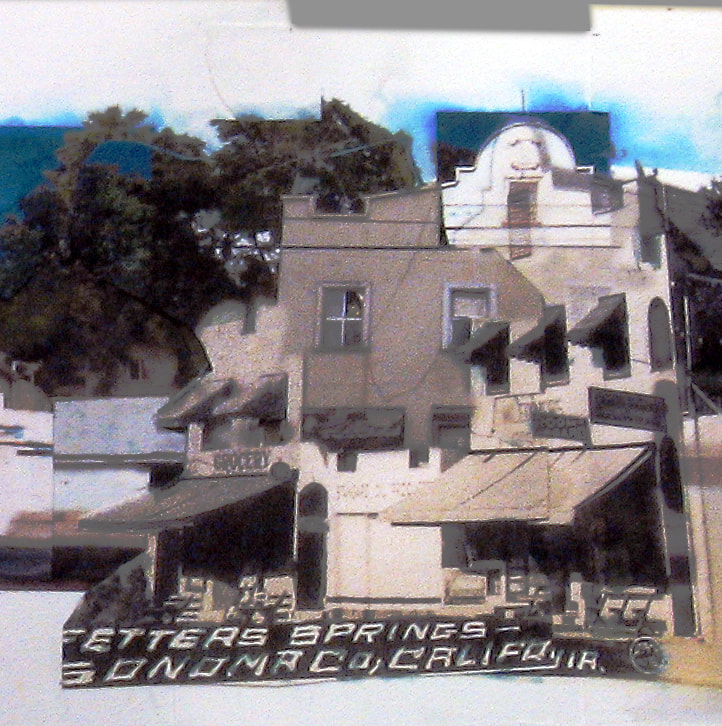 #26B
Photographs: 1940s, 2008.
​The original owners of Caliente Villa in Agua Caliente are not known, but we do know the resort was owned by A. Nevraumont by 1917. Nevraumont was an early resort owner in El Verano, having established El Verano Villa before the turn of the 20th century.
The Villa went through many owners and managers. In 1920 Mrs. Lewis and Miss Ross were in charge. They…”have leased the (resort) and will conduct the popular springs resort on the apartment plan…” Along with “modern conveniences and comforts,” the new proprietors would provide “a long distance phone” and a “classy jazz orchestra!”
That same year, Lewis and Ross entertained “twenty four members of the Salt Lake City baseball team…Mrs. Lewis and Miss Ross were assisted by a number of young ladies…There was dancing, music and card playing…” and “everything was complimentary, including the smokes, and the boys report a swell time.” see https://springsmuseum.org/2018/05/20/caliente-villa/ for more. 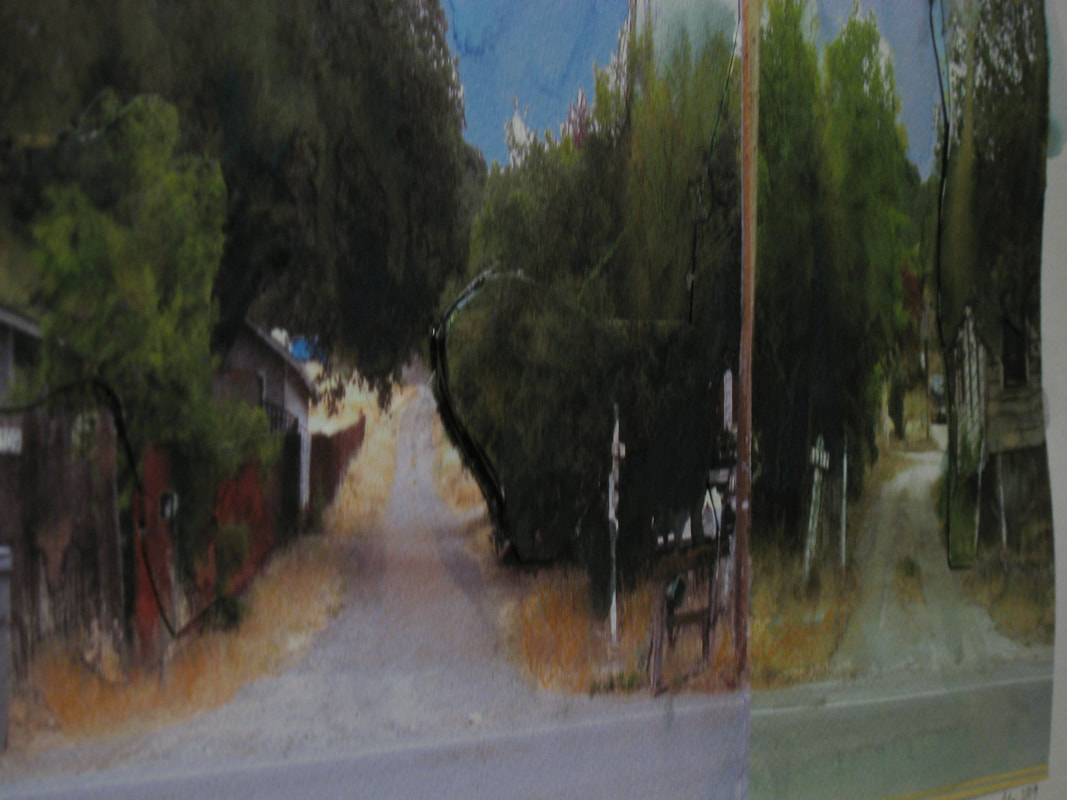 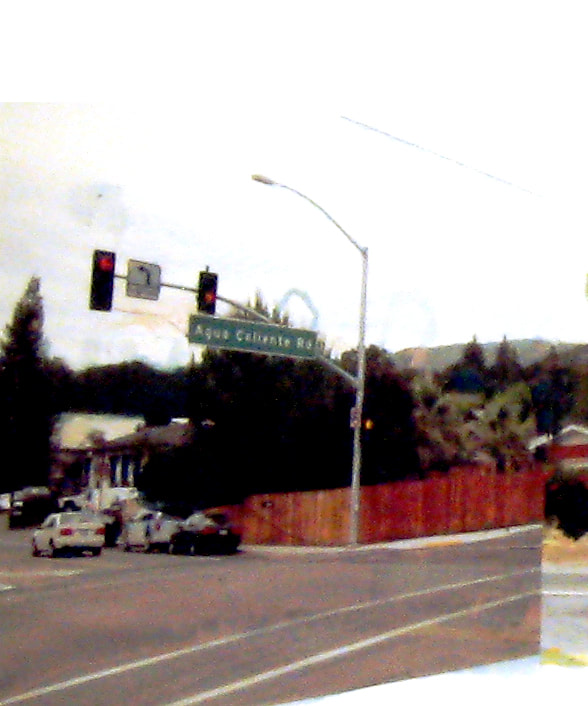